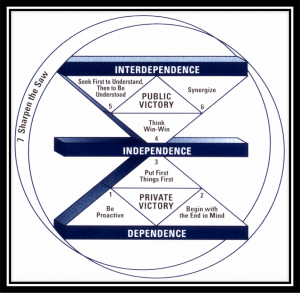 These are the Seven Habits of Highly Effective People by Stephen Covey.

I remember in college students who usually is to get bad grades used to complain almost about everything. The teacher wasn’t good enough, the textbook was difficult to understand, the paper was harder than they expected – that’s what the reactive people do. They always focus on the things that they could not control.

On the other hand, the proactive person would say “yes the textbook is quite hard to understand and the lecture is not the best, but that’s not under my control” instead of complaining about things that they cannot control. They can control the amount of time and effort that they to put to study for an exam and this is the difference between the reactive and the proactive people.

Reactive people are often affected by the physical environment; if the weather is good they feel good if, it isn’t it affects the paths to their performance

Proactive people don’t really care about that since it’s not under their control. Whether it rains or shines, it makes no difference for them, but the things that they can control.

2. Begin with the end in mind

If you are given a choice between two jobs, the first one is something that you’re not very interested – let’s say organizing papers – but it was pretty good salary. On the other hand, you can choose to work as a receptionist which you really enjoy doing because you just love meeting new people every day, but on a lower salary.

Most people, in this case, are going to choose the one with the highest salary. But if you look at the consequence of these two jobs, you will find out that the first job might get you a higher salary, but it’s going to crush you in the long run because you will be doing every single day what you don’t like at all. You will just work for the sake of the paycheck.

On the other hand, if you choose the second job which you really like, although that has a lesser salary, you will enjoy your life because you will be doing every single day what you really like. If you know what you enjoy you will be getting better and better at it and eventually you will end up with much higher salary and the first job. That’s why begin with the end in mind!

Now, let’s say for the sake of example, I have a shop and I sell juices and you have a shop also selling juices, just beside me. One thing I can do to win your customers is by decreasing my prices, maybe by a little bit so people will start coming to my shop rather than yours. But that will encourage you to decrease your prices as well by a little bit, so we’ll end up together making less profit which means we’ll end up losing together.

On the other hand, instead of trying to crush each other, we can say “all right, listen, why don’t we approach this issue with a win-win situation? Let’s stop competing on prices and try to gain more customers by focusing on improving our products, so it can end up together making high profits.” In order for you to win other people, you don’t have to lose. Life is not like a zero-sum game like soccer where the only way for you to win is by making the other person lose. Start looking at every situation as a win-win scenario where both of you can work away completely satisfied.

5. Seek to understand then to be understood

I wanted to take a look at this picture and tell me what do you see? 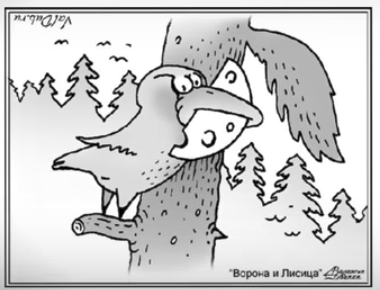 I guess you are seeing a bird with some food in his mouth. But what if I tell you that I’m seeing a fox holding food in his arm? I guess a piece of cheese. Well, you might be thinking that something is wrong with me, because it’s clearly the bird. We can stay here and argue day and night, explaining to each other what is in this picture or we can listen to each other and try to understand why I am seeing a different picture than you.

You find sometimes your pair telling you “I can’t understand my kid he won’t listen to me!” I guess, in order to understand your kids, you have to listen to him not him listening to you.

If I ask you to cut into half a matchstick, I have no doubt that you can do that with almost no effort. Even if I give you 60 of them you can cut them into half one by one and it won’t be hard for you at all, although that it might take a little bit of time.

Now let’s look at another scenario what if all these 60 pieces were combined together? Will you able to cut them into half? I doubt that now. That’s exactly what the synergy is about. Basically, one plus one doesn’t always equal two. It can equal three five or more. These matchsticks get very much stronger together than each of them separately.

When you combine your efforts, you don’t become twice stronger but much more, maybe even ten times, and that’s something we can apply in different aspects of our life. Instead of doing your assignments or getting ready for finals alone, why don’t you get together to study? You will achieve much more with much lesser effort.

Stephen Covey talks about this example. Imagine you come across someone who’s trying to cut down a tree for hours because the saw is dull. You will probably advise him “why don’t you take a break for a while and try to sharpen that saw first, then try again?” What will you think if that person replies “sorry but I am busy cutting the tree.” This sounds pretty stupid, but that’s exactly what we are doing in all aspects of our life.

I see a lot of people trying to get good jobs so that they can make more money. Even I had friends who have three freaking jobs, but one of them is stopping for a moment to pick up a book like “Rich Dad, Poor Dad” and learn the path of becoming rich and to learn better ways to make money. Why? Because they are too busy working, they’re too busy in their job, exactly like the guy would try to cut down the tree with a dull saw.