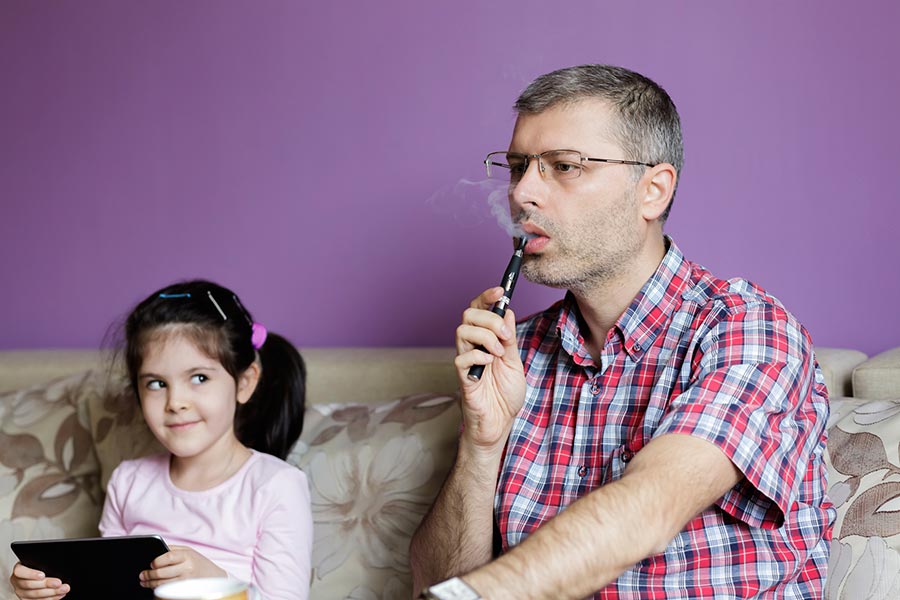 The majority if not all smokers know that it is unhealthy and morally wrong to smoke in enclosed spaces where there are other people, and even worse, if there are kids. As such, you will rarely find a parent lighting up in a car or the house with kids around. We all know that secondhand smoke poses some risks to innocent non-smokers.

Unfortunately, some parents are not aware that the very rules around smoking also apply to vaping. They are misadvised that e-cigarettes only emit vapor when the users are enjoying them. The reality, however, is that exposure to secondhand and third-hand vaping have some health risks.

The study on vaping around children

A group of researchers headed by Dr. Jonathan Winnickoff, a pediatrician and member of the American Academy of Pediatrics (AAP) Section of Tobacco Control, studied how likely parents are to use cigarettes in enclosed areas. The study was prompted by the industry messages and ads painting vapes as safe products, while in reality, they are not. Winnickoff and the team wondered if the parents could have bought into this misleading information, and they believed that it would be okay to use the products around kids and infants.

The study revealed that 63.8% of dual users (those who smoked and vaped) discouraged smoking in the home. Surprisingly, only 26.3% had such policies against vaping in the house. Furthermore, only 21% of dual users had policies prohibiting the use of e-cigs inside the car. Winnickoff tried to use a hypothesis to explain this phenomenon. He explained that parents might view e-cigs as safe and not harmful in enclosed spaces. This is because they do not have the unpleasant odor like cigarettes and the aerosols that they emit vanish quickly.

The risk of vaping around kids

Winnickoff told one media outlet that the findings from the study were frightening. He emphasized that parents were posing some health risks to their little ones without understanding the effects and science had already shown more about those products. Contrary to the assumption that the e-cigs emit water vapor, there is no water at all but a “sticky goo” that is converted into very fine aerosol with microscopic particles that are breathed into the lungs.

Moreover, the aerosol has very high levels of nicotine, which is a significant threat to a child’s developing brain. The aerosol also contains nitrosamines, which are among the most dangerous cancer-causing compounds known to man. There are also heavy metals that come from the vaping device’s heating coils that are also hazardous.

But even as we discuss the dangers of smoking and vaping around the little ones, if you are a vaper, you need to use a quality vaping device. You can get quality ecig mods from a leading manufacturer.

Ways in which nicotine get into the kid’s body

Vaping around children is dangerous because nicotine get into their bodies. This happens through these three ways:

Although parents tend to protect their kids from cigarettes and assume that e-cigarette are safe, these products are dangerous for all kids from the newborns to adolescents. The most significant risk is exposing the brains and lungs of their children to high nicotine concentration, hampering their proper development and the appropriate weight gain. Kids also tend to take up vaping and smoking after seeing their parents do it.

Teenagers are also likely to get addicted to nicotine due to exposure to the same behavior at home, making their brains used to respond intensely when they use a tobacco product (through inhaling or smoking) themselves.

For the above reasons and the likely harm from nicotine and other compounds from vapes and cigarettes, it would be best if parents quit all tobacco products entirely. But if they cannot give them up, they should at least ensure that no smoking or vaping takes place in their homes or cars.