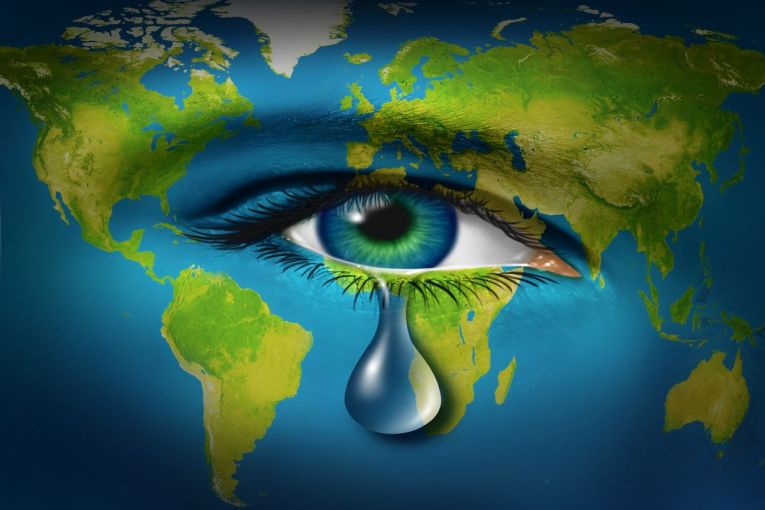 One of the scariest ways to end the world is by nuclear holocaust. but it does not have to be World War III. A nuclear winter could kill billions and be triggered if enough of the world’s 450 nuclear plants failed to live up to safety requirements.

In 2002, FirstEnergy was fined a record $33 million when they tried to cover up safety violations in the Davis Besse nuclear plant in Ohio. FirstEnergy failed to fix a leak, which corroded a football-sized hole in the pressure vessel above the reactor. Instead of the required 15 centimeters of stainless-steel, there were only 9.5 millimeters between us and a nuclear meltdown. Luckily it was caught in time. The reparation costs were $600 million.

Six other nuclear power plants with the same reactor were also found to have the same problem.

Unfortunately, FirstEnergy have a bit of a track of record with near nuclear apocalypses since they own the company who ran the Three Mile Island power plant in Pennsylvania. America’s biggest nuclear accident occurred there in 1979 when the reactor had a partial meltdown and spewed radioactivity hundreds of miles downwind. Two million people were exposed and the clean up operation took 14 years and nearly $1 billion to complete.

Official reports say the accident didn’t increase cancer rates in the local population, although campaigners argue that disease rates have increased. Either way, it was a close call.

Monsanto’s Roundup is the champion of weed killers. Popular in the 1970s, it has become 100 times more widespread since then. It is the most used weed killer by farmers and second most used in homes and gardens.

However, a by-product of Monsanto’s weed killer is dioxin. The WHO says dioxin is so widespread that everyone in the world experiences background exposure to it. Also an ingredient in Agent Orange, it caused leukaemia in Vietnam veterans, has poisoned dozens of Monsanto workers and caused defects in over half a million babies whose parents were exposed to the chemical. It also damages the immune system, making us more vulnerable to disease.

A wide range of Monsanto products were contaminated by dioxin. The chemical soaked the soil around the factories, where these products were made, causing cancer in the local population. Monsanto tried to cover up the effects of dioxin by conducting studies that ignored its own employees who were killed by dioxin. It is now paying out tens of millions of dollars in compensation, and the EPA is cleaning up the soil around the factories before it contaminates the nation’s waters.

Along with DuPont Britain’s ICI was the largest producer of Chlorofluorocarbons or CFCs. These chemicals were used in paints and refrigerators, earning ICI billions of dollars. But while CFCs kept our food frozen, they also helped heat up the Earth.

A shocking 84% of CFCs in the atmosphere is from man-made products, and they contribute massively to the global warming by trapping heat on the planet. This, in turn, has led to sea levels rising twice as fast as normal and wildfires happening four times as often and lasting five times as long. These not only directly threaten human lives, but have also raised the rate of species extinction and the risk of disease.

In addition to that, CFCs also created a massive hole in the ozone layer. This hurts humans more directly by increasing our risk of skin cancer and blindness, damaging our immune system, and increasing smog – which can kill us with respiratory problems and toxins.

At first, ICI knew CFCs were harmful but abandoned their research into alternatives, because they made too much money from CFC products. Luckily, they changed their minds in the mid-80s and lobbied against the use of CFCs in products. From 1987 onwards, international treaties have banned manufacturing CFCs.

7. Poison in the water (Syngenta)

For decades, the world had a love affair with atrazine, a pesticide manufactured by Syngenta. It’s a weed killer used in every lawn, golf course, and grass crop in America. Besides killing weeds, it can also cause birth defects, weak hearts and limbs, and possibly cancer in both humans and animals.

In 1991, the EU banned it because it contaminates groundwater so badly. Around 80% of the water we drink contains atrazine. While Europe may have escaped the ăperils of atrazine, America still uses over 36 million kilograms of it each year. A quarter of a million kilograms of that drifts off fields into clouds, spreading across the states and raining down into the water systems, affecting millions of people. No one knows quite how many.

Fortunately, Syngenta was forced to pay $105 million to cover the costs of filtering atrazine from water supplies.

The 2011 Fukushima nuclear meltdown was equivalent to 20 atomic bombs going off. It’s the largest disaster after Chernobyl. But while Chernobyl happened because of one of the Soviet government’s nuclear reactors was badly destroyed, the three meltdowns at Fukushima happened because of TEPCO had a habit of covering up their safety violations. Over 200 of them.

The meltdown was triggered by a tsunami and TEPCO said it was a natural disaster. but investigators found that not only had TEPCO failed to make an evacuation plan in the case of a meltdown, they are also not bothered to carry out risk assessments.

The government shut down nearly all of Japan’s nuclear reactors to make sure the disaster didn’t repeat itself. Amazingly, no one was killed, although 700 people may still die from cancer in the coming years.

TEPCO will pay nearly $58 billion in compensation, while the government is due to pay nearly $300 billion to contain the radioactive waste.

Roughly 95% of climate scientists agree that global warming is happening too fast because of human activity. Between them, Exxon, WSPA, Shell, and API spend at least $114 million every year on climate change denial.

The Royal Society and The New York Times say the industry uses this money to fund their own bogus scientific studies, discrediting climatologists and to support politicians opposed to climate change laws. Climate change accelerates as a result of carbon emissions from human activities, mostly from burning fossil fuels like coal and oil.

Increasingly extreme weather patterns are happening five times more often than before and are linked to man-made global warming. These are contributing to natural disasters and destroying habitats, animal species, and exacerbating disease outbreaks. Along with health problems associated with oil pollution, man-made climate change has caused millions of deaths, with more to come.

Teflon is a slippery, unreactive material used to make non-stick pans, pipes, and even clothes to make them easy to clean. There was a time when Teflon was in everything, including your blood. You probably have some in you right now. Teflon was sold all over the world, contaminating those populations too.

DuPont created Teflon in 1938. One of its key ingredients is C8, which can cause kidney and testicular cancer, rectal ulcers, thyroid disease, high cholesterol, and pregnancy problems. It does not biodegrade and will stick around for a long time.

China is not the biggest producer of Teflon and has contamination levels 500 times higher than the USA’s legal limit. 99% of the babies are born with Teflon in their blood and 90% of the C8 we are exposed to, actually comes from our food.

In the 1960s, NORAD developed a new computer system to control the launch of nuclear weapons. The equipment and software were provided by Data General Corporation. Part of the computer job was to alert NORAD to any incoming Soviet nukes.

In 1980 the computer suddenly said that 2 Russian nukes were inbound. Then it said that 220 missiles were headed towards America. NORAD scrambled and was ready to launch all of the USA’s nukes in retaliation. Luckily, someone checked the skies before launching and saw that there were actually no Russian warheads flying towards them.

The alert was really a glitch caused by a faulty computer chip. Instead of computing 0, the chip output 2 in error. In turn of that, instead of installing the $125 chips originally planned, the engineers saved money by using 46-cent chips instead. The computer system was in consequence replaced by NORAD.

Bees help pollinate around 80% of all plants. Without bees, huge swathes of the world’s plants would fail to reproduce and die out. This, in turn, could cause mass extinctions of animals along the food chain.

Bayer, along with Syngenta is the biggest maker of neonicotinoid pesticides. These are mostly harmless to humans but deadly to insects – in particular, their scents attract bees and then the poison kills them. In the past 18 years, bee populations have declined by a massive 30% – and at least half of those dead bees are linked to the use of pesticides.

The EU has already implemented a moratorium on the chemicals and is considering an outright ban.

Despite campaigners and scientists urging Bayer to stop making such pesticides, Bayer continues to lobby the EPA to keep approving these chemicals.

In the late 1980s, a European biotech firm hired German scientists to genetically engineer a new strain of bacterium. The idea was that it would break down excess harvest crops into ethanol. This was intended to discourage farmers from burning waste crops, by making a useful byproduct.

Fortunately, before EP approved the new bacterium, scientists from Oregon State University had conducted an independent study. They found that the new bacteria had only been tested in pH neutral soil – when put in the normal soil they destroyed all the wheat in their test in one week. The bacteria also produce 17 times more ethanol than it takes to kill a plant – it would poison all plants in the crop and easily spread to other crops. If used globally, the bacteria would have caused the starvation of all life on Earth.